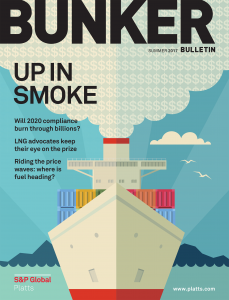 DHD have produced the latest Bunker magazine – for S&P Global, Platts. Here, the editor Maurice Geller gives us an insight on the lead story and other topics covered in this edition.

From a whisper to a scream? A murmur to a crescendo? Actually, the industry’s resistance to the IMO’s decision last October that the new low sulfur cap would be implemented from 2020 was never muted exactly – but from FUJCON in March to Platts Rotterdam Bunker conference late May, there is still no hotter – or contentious – issue in shipping circles.

But there’s no turning back: 2020 is going to happen. (Technically, as IMO official Edward Hughes tells us in this issue, it is ever so slightly possible it could be postponed,   by an amendment to MARPOL Annex VI – and it takes a minimum of 22 months for an amendment to be proposed, approved, adopted and then enter into force. So a proposal would have to be submitted to MEPC 71 in July – and as of late May none has been received. So, no.)

As our writers note, coming as it does at a time of prolonged stress on the finances of much of the Industry, the process is going to be a “challenging” one.  Hence the main thrust of this issue of Bunker Bulletin: to establish what exactly are the main options ship owners have to tackle the new sulfur cap – and how to find the least painful method of coping with it.

Elsewhere, naturally, we have a focus on LNG – characterized by one advocate as “definitely the future marine fuel,” as cleaner alternatives receive more attention to meet stricter environmental regulations. Plus Interviews with operators from Denmark and Germany to India about global ambitions. And a regional roundup from leading bunker hubs like Fujairah and Panama to such exotic contenders as Fiji, Mauritius and Morocco.

But with 2020 front and center, we also acknowledge the upside that rarely gets discussed in maritime circles, namely the improvements we’re likely to see in the environment in the coming years as a result. As Jack Jordan says in our cover story, the process of weaning the shipping industry off a cheap fuel 3,500 times more sulfurous than road diesel was always going to be problematic – but it is an inevitable change that will be welcomed by many.