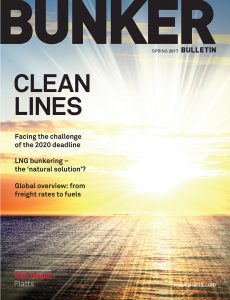 DH Design have produced the next edition of BUNKER magazine for S&P Global – Platts.

Hell isn’t merely paved with good intentions, Aldous Huxley famously said, it’s walled and roofed with them! So it was with the International Maritime Organization when, in the face of some industry resistance, it decided on a new ultra-low global limit on sulfur in marine fuels, from January 2020 onwards. While no one could argue with the IMO’s intentions, it was they said – a bit like St Augustine – the timing that was the problem – as well as a stream of other issues such as the upgrade of vessels, the availability of the cleaner fuels, and the enforcement and implementation of the new rulings. This issue of Bunker magazine looks at these and some of the other challenges facing the industry in preparing for that deadline.

One widely floated solution is bunkering with liquefied natural gas – the “compliance cure-all” as it’s been called. Some in the marine industry see LNG as the natural solution to the problem of increasingly strict emissions regulations set to emerge over the next few years – but ship-owners aren’t jumping at it yet, our correspondents say. We examine why – and look at what obstacles need to be addressed before the fuel can realize its potential.
Elsewhere, in keeping with our “clean” theme – we look at the move by the port of Singapore to stamp out certain practices such as the notorious “cappuccino effect” where fuel is delivered with large amounts than they thought they had bought. Hence, as of the start of this year, Singapore has rolled out a mass flow meter mandate to counter mistakes and abuse. This is discussed at length in this issue.
https://dh-design.co.uk/2017/02/28/clean-lines/
DH Design Awarded Sencio Contract
Back to Basics